Adding a New EIN to the Health Plan

Question:  What are the action items for employers adding a new EIN as a participating employer to the health plan?

Short Answer: There are five main considerations for employers to address when adding a new EIN to the health plan.

Employers cannot offer coverage to an entity outside of their IRC §414 controlled group without creating a multiple employer welfare arrangement (MEWA).

There are two different types of §414 controlled groups:

Offering coverage to any entity that is outside of the controlled group—thereby creating a MEWA—generally is not an option.  Insurance carriers for a fully insured plan generally will not permit employers to create a MEWA outside of arrangements specifically designed for that purpose (e.g., health plans sponsored by a bona fide association).

Furthermore, California and other states prohibit creating a self-insured MEWA.  California’s ban has prohibited the creation of a self-insured MEWA since 1995 (primarily because of fraud concerns).  Even if self-insured MEWAs are permitted by state law, offering coverage to an entity outside the controlled group would create numerous other issues (e.g., stop-loss coverage concerns, Form M-1 filing requirements).

See our previous post on this issue for more details: Avoiding the Inadvertent Creation of a MEWA.

The employer will need to notify the applicable insurance carriers (or stop-loss providers if self-insured) of the new participating entity.

The carriers will generally require the employer to attest that the additional EIN is within the employer’s controlled group to confirm that its participation will not create a MEWA.

Most wrap plan documents and wrap SPDs specify which entities within the employer’s controlled group are participating employers in the plan.

The employer’s ACA reporting vendor needs to incorporate the new EIN into the ACA reporting system to ensure it addresses the §6055 and §6056 requirements for controlled groups.

The Form 1094-C for each ALEM will contain the following:

The full-time employees of each EIN (i.e., each ALEM) must also receive a Form 1095-C with that ALEM’s corporate name and EIN.  The employer cannot simply use the parent EIN for all Forms 1095-C in an Aggregated ALE Group.

The ACA employer mandate’s large §4980H(a) penalty (frequently referred to as the “A Penalty” or the “Sledge Hammer Penalty”) applies where the ALE fails to offer minimum essential coverage to at least 95% of its full-time employees in any given calendar month.

The 2020 A Penalty is $214.17/month ($2,570 annualized) multiplied by all full-time employees (reduced by the first 30).  It is triggered by at least one full-time employee who was not offered minimum essential coverage enrolling in subsidized coverage on the Exchange.

Bonus: No Effect on Form 5500 Reporting

Unlike the ACA reporting complications, additional EINs generally have no effect on the plan’s Form 5500 reporting.  The Form 5500 does not request participating employer information for each entity or EIN within the plan as long as they are all members of the same controlled group.  Rather, the Form 5500 looks only to the plan sponsor entity’s information and the total participants in the plan (regardless of which entity or EIN they are under).

For full details on all these issues, see our ABD 2020 M&A Employee Benefits Guide.

(A) The term “multiple employer welfare arrangement” means an employee welfare benefit plan, or any other arrangement (other than an employee welfare benefit plan), which is established or maintained for the purpose of offering or providing any benefit described in paragraph (1) to the employees of two or more employers (including one or more self-employed individuals), or to their beneficiaries, except that such term does not include any such plan or other arrangement which is established or maintained—

(i) under or pursuant to one or more agreements which the Secretary finds to be collective bargaining agreements,

(ii) by a rural electric cooperative, or

(B) For purposes of this paragraph—

(ii) the term “control group” means a group of trades or businesses under common control,

(iii) the determination of whether a trade or business is under “common control” with another trade or business shall be determined under regulations of the Secretary applying principles similar to the principles applied in determining whether employees of two or more trades or businesses are treated as employed by a single employer under section 4001(b), except that, for purposes of this paragraph, common control shall not be based on an interest of less than 25 percent…

(1) An individual who owns the entire interest in an unincorporated trade or business is treated as his own employer, and a partnership is treated as the employer of each partner who is an employee within the meaning of section 401(c)(1) of the Internal Revenue Code of 1986. For purposes of this title, under regulations prescribed by the corporation, all employees of trades or businesses (whether or not incorporated) which are under common control shall be treated as employed by a single employer and all such trades and businesses as a single employer. The regulations prescribed under the preceding sentence shall be consistent and coextensive with regulations prescribed for similar purposes by the Secretary of the Treasury under section 414(c) of the Internal Revenue Code of 1986.

A control group relationship exists if the businesses have one of the following relationships:

− Combination of the above

A parent-subsidiary controlled group exists when one or more chains of corporations are connected through stock ownership with a common parent corporation; and

− 80 percent of the stock of each corporation, (except the common parent) is owned by one or more corporations in the group; and

− Parent Corporation must own 80 percent of at least one other corporation.

A brother-sister controlled group is a group of two or more corporations, in which five or fewer common owners (a common owner must be an individual, a trust, or an estate) own directly or indirectly a controlling interest of each group and have “effective control”.

− Controlling interest – 1.414(c)-2(b)(2) – generally means 80 percent or more of the stock of each corporation (but only if such common owner own stock in each corporation); and

− Effective control – 1.414(c)-2(c)(2) – generally more than 50 percent of the stock of each corporation, but only to the extent such stock ownership is identical with respect to such corporation. 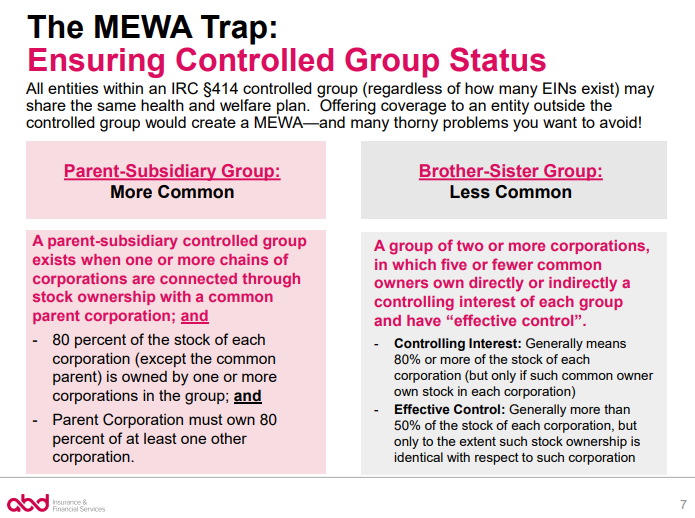 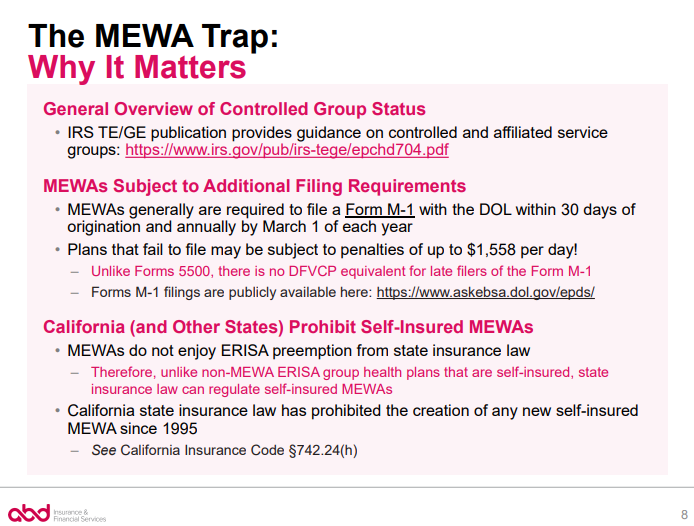 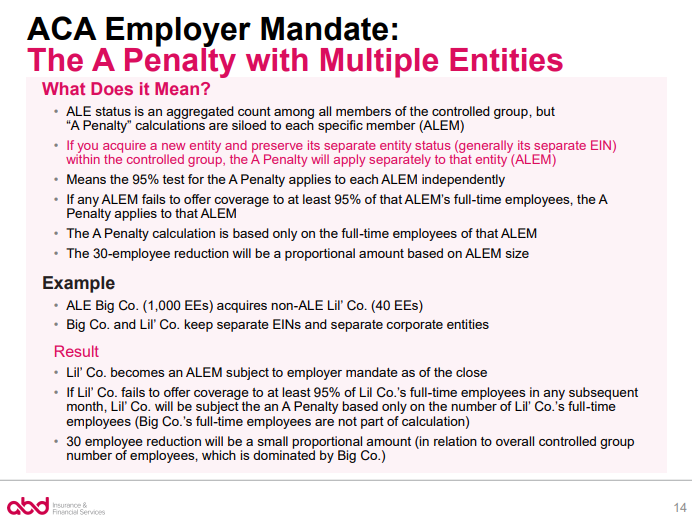 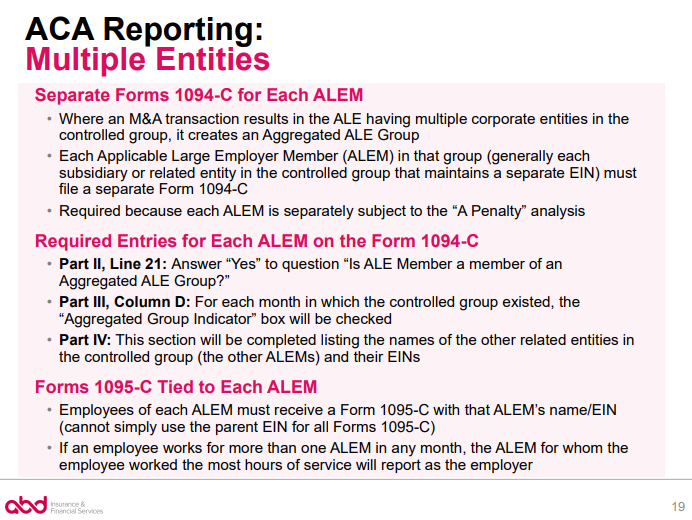 Brian Gilmore is the Lead Benefits Counsel at ABD. He assists clients on a wide variety of employee benefits compliance issues. The primary areas of his practice include ERISA, ACA, COBRA, HIPAA, Section 125 Cafeteria Plans, and 401(k) plans. Brian also presents regularly at trade events and in webinars on current hot topics in employee benefits law.
The information provided is of a general nature and an educational resource. It is not intended to provide advice or address the situation of any particular individual or entity. Any recipient shall be responsible for the use to which it puts this document. ABD shall have no liability for the information provided. While care has been taken to produce this document, ABD does not warrant, represent or guarantee the completeness, accuracy, adequacy, or fitness with respect to the information contained in this document. The information provided does not reflect new circumstances, or additional regulatory and legal changes. The issues addressed may have legal, financial, and health implications, and we recommend you speak to your legal, financial, and health advisors before acting on any of the information provided.